How to Use the Framing Effect to Sell More Products 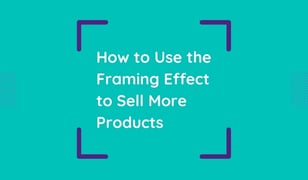 Let’s say you’re at a casino, and someone has asked you if you want to play a game of chance. You’re given $50, and you can either gamble it and take your chances at winning big, or you can walk away and lose $30 automatically.

Here’s your other choice: You can gamble the money and risk losing all of it, or you can walk away right now with $20 for your trouble. Which option do you choose?

And did you notice that both options are the same? In both scenarios, your choice is to either gamble or lose $30 of your $50, which means you keep the remaining $20. But some simple changes to the wording around the question trick you into looking at it in two different ways. This was the basis of a 2006 study published in the journal Science. In the study, 62 percent of people chose to gamble when their other choice was presented as losing $30. Only 43 percent chose to gamble if they were told their other option was to walk away with $20. That’s an example of what’s called the framing effect, and it’s useful in more than just studies about gambling. It’s a tool used to encourage customers to buy more products, which means more sales and a boost to your bottom line.

What Is the Framing Effect?

The framing effect is a type of cognitive bias that causes people to react to something in different ways depending on how the information is presented to them. It’s also an old trick copywriters have been using for ages to help sway consumer behavior. It’s something ecommerce retailers can and should use to increase their conversions and sales. Put even more simply, it’s a way of shifting peoples’ perspectives by making slight changes to the way you word something.

These are just some of the ways retailers can use the framing effect to influence their customers’ thinking. But framing is much more than a marketing trick—it’s something we all use every day when we’re negotiating, arguing, making plans, or apologizing.

When using framing in your marketing copy or product descriptions, there are basically two ways to go: Positive framing and negative framing.

When using positive framing, you want to focus on what the buyer is getting. They’re gaining something. They’re making progress or growing in some way.

Some words to use in your copy when you’re using positive framing are: 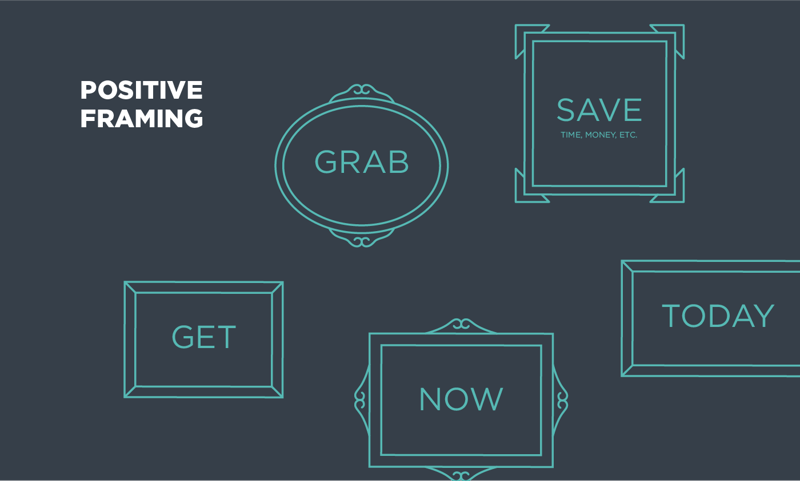 On the other hand, when using negative framing, you want to make buyers afraid of losing out on something. Negative framing taps into peoples’ natural fears—of loss, or of missing out. Buying your product will prevent a negative outcome.

Some words to use in your copy when you’re using negative framing are: Which Is Better: Positive or Negative Framing?

That depends. Research seems to indicate that people tend to react better to positive framing. But remember our casino option above? In that case, more people chose to gamble when they were told they would lose money otherwise. So the bottom line is that positive and negative framing can both work. It’s important to A/B test both, and optimize your strategy based on the metrics you gather from your own store and sales.

How To Use the Framing Effect To Boost Ecommerce Sales

Ready to take advantage of the framing effect to boost your own conversions and sales? Here are some of the best ways ecommerce retailers can use this trick.

This is a more general copywriting tip, because you should always use the most specific language you can in all your product descriptions, marketing copy, and other product information.

But when it comes to successfully using the framing effect, this becomes even more important. To get your customers to see the difference between the options they’re being presented, they have to understand those options. Is any of your language vague or unclear? If so, it will reduce the effectiveness of your framing.

With negative framing and specific language: Don’t spend this winter shivering—banish those winter chills with a knee-length, down-filled parka.

Help Buyers Visualize What they Could Gain or Lose

In addition to being specific, your language should be as visual as possible. Again, this is also a general copywriting technique, since visual language helps appeal to the emotional nature of making purchases. But by combining highly visual phrasing and framing, you can give shoppers the push they need to hit that “add to cart” button.

With visual language and positive framing: Every eye will be on you when you walk down the aisle in this Victorian gown with a delicate lace overlay and train.

With visual language and negative framing: Don’t regret every time you look at your wedding photos because your dress wasn’t the perfect fit—this Victorian lace gown flatters every figure.

Consider Both Short- and Long-Term Impacts

When trying out different ways of framing your writing, one way to look at it is to consider both the short-term and long-term ramifications for your buyers. When framing with short-term versus long-term language, one isn’t necessarily better than the other; rather, this is another set of options you’ll want to A/B test to see which is more successful in selling your products.

Example: Get free delivery on a new mattress.

Example with short-term, positive framing: Get the best sleep of your life tonight—and free delivery—when you order a 12-inch gel memory foam mattress.

Example with long-term, negative framing: Avoid back and joint pain when you’re older by sleeping on the right mattress: A 12-inch gel memory foam for optimum support.

Real Examples of the Framing Effect In Action

Like we said before, the framing effect isn’t only seen in advertising. We use it all the time. Now that you know what it is and how it works, you’re likely to start picking up on examples of positive and negative framing even in your everyday conversations. Don’t believe us? Here are some common examples:

What Do You Do When You’re Wronged By Your Auto Insurance Company?

When a big company, like an auto insurance provider, does you wrong, one avenue to get justice is to file a lawsuit. But oftentimes, consumer contracts limit your ability to do that. And in New Jersey, because of some clever framing, auto insurance buyers actually chose themselves to put that limit in place.

When signing up for a new insurance policy, 80 percent of New Jersey residents chose “limited rights to sue,” because it was presented to them as the default option that most consumers choose. This appealed to peoples’ nature to follow others, to not go against the grain. It was positive framing that gave buyers the comfort that they were choosing the option most people choose, even if it wasn’t in their best interest.

In neighboring Pennsylvania, however, only 25 percent of residents signing up for new policies chose “limited right to sue,” because their default option was presented as “full rights to sue.”

Use Sunscreen to Prevent Skin Cancer

For years, sunscreen has been marketed as our best line of defense against skin cancer.

Tanned skin is something a lot of people want, and sunscreen can prevent you from getting that sunkissed, bronzed glow in the summertime. That’s why negative framing is extremely important for boosting sunscreen sales and usage—so people stop thinking about the tan they won’t get, and start thinking about the dangers of not protecting themselves from UV rays.

An example of negative framing that works in this scenario is this: Every hour, two people die from skin cancer. If you don’t use sunscreen, your risk of cancer is two times higher. Don’t put yourself in that kind of risk.

The Framing Effect Is Part of Our Psychology

Now that you’ve spent all this time reading about the framing effect, you’re going to start noticing it all the time. In all your conversations, you’ll start to see how people frame things, and you’ll see what an essential part of our psychology the framing effect is.

But more than that, it’s a tool that marketers and retailers can and should use to boost their sales and bottom line.

How to Boost Sales with Killer Product Descriptions on Shopify

Selling Online? Find Out What PIM Can Do That Spreadsheets Can't