The Evolution of Ecommerce [10-50 Years] [Timeline] 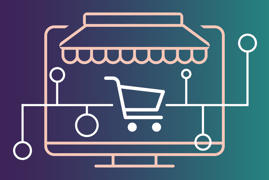 For as long as retail has existed, it’s been evolving to fit the needs of consumers.

From marketplaces in ancient Greek acropolis to the sprawling, modern shopping malls of today, consumers’ needs have always been what’s driven innovation in retail. And in no period of history is that more true than in the last generation.

In just the last 50 years, we’ve seen retail make leaps and bounds into the digital age. Ecommerce was just a pipe dream a generation ago, and now it’s one of the most popular ways people shop. From its humble beginnings in the 1970s, to when people first began creating ecommerce websites in the 1990s, to its explosion of new technology and popularity in the 2010s, here’s how ecommerce has evolved over its lifespan to become the ubiquitous part of shopping it is today.

How Ecommerce Emerged for a Generation of Shoppers

Ecommerce was a possibility some innovative entrepreneurs were considering even before the internet existed. But how? Here’s how 50 years of technological advancement gave birth to the ecommerce industry we now know.

That’s just the first 40 years of ecommerce’s existence. The last decade has seen levels of change and growth in the industry no one could have predicted.

Ecommerce Has Exploded in the Last 10 Years

As you can see, the evolution of ecommerce started slowly.

As we entered the 2000s, major innovations to the industry came almost yearly.

In just the last decade, ecommerce has exploded in both growth and popularity. Even the biggest retailers can hardly keep up with how much the industry has evolved in each of the last 10 years. Let’s take a look

This brings us to the present day, when ecommerce is still an absolutely thriving industry, appearing to have nothing but more growth ahead of it.

In 2020, global ecommerce sales topped $4.13 trillion, an 18 percent increase from 2019. In 2021, more than 2 billion people regularly made ecommerce purchases worldwide, and mobile ecommerce has continued to grow — nearly 73 percent of total sales took place on mobile devices in 2021. Omnichannel ecommerce ramps up as retailers want to sell via different digital channels and increasingly rely on headless commerce solutions to have a single back end for numerous visual interfaces in web, mobile, smart devices, social media. I wonder what 2022 holds.

Globally, around one-third of people now make an online purchase at least once per week and China remains the top ecommerce market in the world, followed by the U.S., the U.K., and Japan. Based on these trends, we can only expect more!

Be Ready for Whatever the Future of Retail Brings with PIM

The one thing we can predict with absolute certainty about the future of ecommerce is that retailers will need to stay agile, flexible, and open to change if they want to keep up with the industry — and their competition.

One of the best ways online sellers can future-proof their business is by investing in product information management (PIM) software, which will open up new omnichannel strategies, provide valuable business insights, and help them beat their competition to market and boost their bottom line, no matter what the future of ecommerce brings.

Ready to see how PIM can help your business transform to keep pace with the ever-shifting landscape of the ecommerce industry? Download our free ebook!

How Customer Experience Can Become Your Brand's Secret Weapon

The Growing Opportunities (and Challenges) of Social Commerce