Google Shopping vs Amazon: Which One is Best for Your Brand? 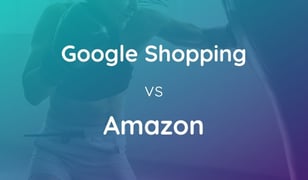 For any online brand or retailer, choosing between selling on Google or selling on Amazon can be a daunting task.

While Google has historically been considered the digital advertising giant, times are changing. Amazon has been ramping up its efforts over the past year.

This article offers some basics about Google and Amazon’s offerings for ecommerce advertising, comparing Google Shopping and Amazon Sponsored Products. We also have tips to help brands determine the right platform for them.

Google vs Amazon, or, Goliath vs a Growing David

For a long time, Google was the undisputed champion of all things internet. And in some respects, not much has changed. Even in 2019, more than 20 years after a pair of Stanford students developed Google as a Ph.D. project, Alexa ranks the search engine as the world’s number one website.

It did $30 billion in ad revenue for the first quarter of 2019 alone and is estimated by eMarketer to account for 37.2 percent of all digital ad spending in the U.S.—with Facebook second at 22.1 percent and Amazon third at nearly 9 percent. But competitors like Amazon are starting to catch up as they gain momentum in online advertising.

While Amazon does roughly a quarter of the digital ad revenue that Google does (for now), it can still beat Google at its own game in certain areas—including product search. A Vox survey found 55 percent of all product searches begin on Amazon. And, as of July 2019, Amazon has a lower cost-per-click at $0.77 with Google coming in at $1.16.

More and more, giants like Verizon, AT&T, and Geico are shifting advertising to Amazon despite not having any products for sale on the platform. Amazon is simply where the shoppers—and their data—are.

The Basics of Google and Amazon’s Advertising Platforms 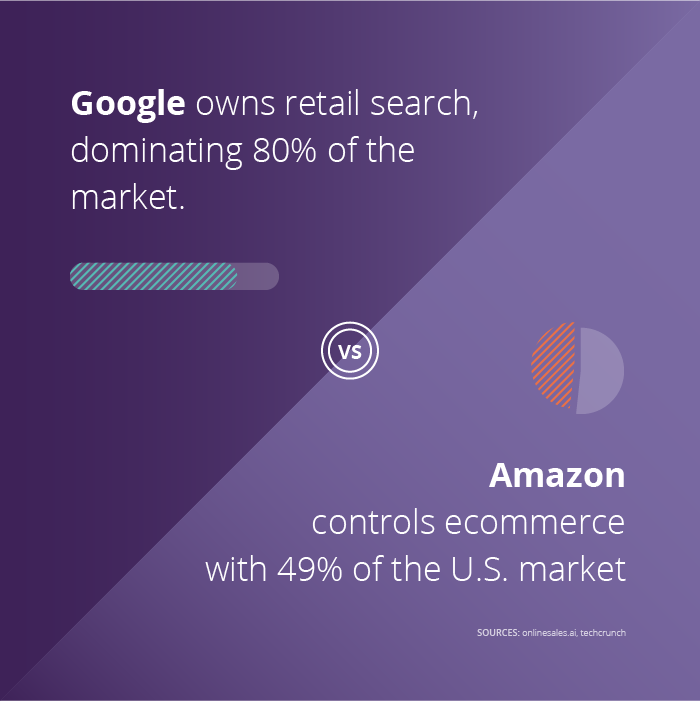 On a basic level, Google essentially owns retail search (or roughly 80 percent of it) while Amazon dominates ecommerce (Amazon’s share of U.S. ecommerce was at 49 percent as of July 2018). Products can be sold a variety of ways on Google:

In either case, Google has historically shied away from selling directly through its website, instead generally trying to direct web traffic to seller websites.

This runs counter to the philosophy of Amazon, where all sales occur on their site. As such, Amazon wields enormous power over its vendors and resellers, controlling everything from customer information (which it doesn’t share) to requiring $100 minimum purchases for certain ads.

There are a number of differences between Google and Amazon’s advertising approaches. One of the main ones: Where customers come in the sales funnel.

With Google, even through its ecommerce portal, customers are often at the beginning of the buyers’ journey. Frequently, they’re just seeking information. With Amazon, they’re more likely to be looking to make a purchase when they visit.

“It’s another reason in the ‘Google Shopping versus Amazon’ debate that emphasizes Amazon’s growing importance in the advertising market,” the experts at digital marketing firm WebFX noted. “Just as Google is the go-to hub for searching, Amazon is the place for shopping.”

Perhaps Google hasn’t taken kindly to Amazon’s insurgence. Or perhaps Google simply wanted to step its ecommerce game up. Whatever the case, earlier this year, Google announced it would revamp Google Shopping to allow products to be purchased directly through its Google Express app.

In addition, Google is expanding showcase shopping ads to, as one author notes, “‘own the whole funnel” and reach consumers with relevant content no matter where they are in their consumer journey. 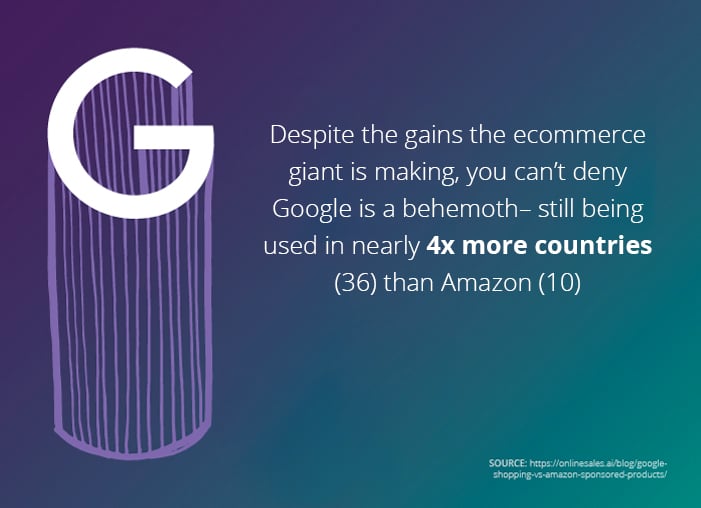 For anyone trying to make sense of Google Shopping and Amazon Ads, this section covers some features of each, illustrating their similarities and differences.

“We call these placements Shopping ads, because they're more than a text ad—they show users a photo of your product plus a title, price, store name, and more,” Google says. “These ads give users a strong sense of the product you're selling before they click the ad, which gives you more qualified leads.”

These ads can appear at the top of search results, in a bar to the right of search listings, and on Google-owned sites like YouTube.

Just as Google Shopping Ads can help vendors and sellers gain a leg up in its marketplace, Amazon Sponsored Products and Sponsored Brands help anyone trying to sell there. And, interestingly, they’re much more popular than Google Shopping Ads. In fact, 74 percent of Amazon sellers utilize its pay-per-click tools as opposed to just 24 percent with Google Shopping.

For now, similarities between Google Shopping and Amazon Ads include the look of ads, the use of review systems, and the emphasis on pay-per-click within each system.

In short, numerous differences exist between Google Shopping and Amazon Ads, which we’ll delve into more heavily below. Fundamentally, though, Google has been historically geared to direct search traffic to seller websites, while Amazon has been all about capturing ecommerce sales.

Key Differences Between the Advertising Experience on Google vs Amazon

Here are some of the key differences between advertising on Google and Amazon:

Figuring Out What’s Best for Your Biz: Amazon, Google Shopping, or Both 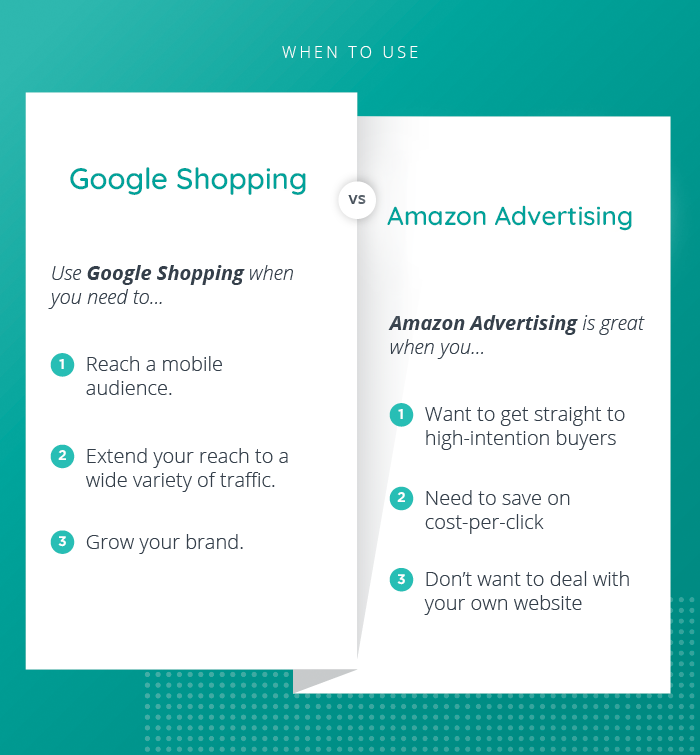 First things first. This article, overall, does not purport to tell anyone why Google is better than Amazon or vice versa. Both have their pros and cons for brand growth.

As one author wisely notes: “Amazon will continue to dominate e-commerce, while Google will dominate retail search. This means that, as a retailer, you need to use both to your advantage. You can list your products on Amazon, but still, invest in Google Shopping ads since they dominate the mobile search.”

Web advertising isn’t a zero-sum game. Smart ecommerce brands and retailers will diversify their use of marketing channels all while making sure to pursue smart strategies for each.

And just how are they supposed to do that when they’re busy managing thousands of data points across hundreds of projects on dozens of channels that seem to change daily? With product information management (PIM) software that’s meant to handle, well, all of the above.

With a modern PIM, product teams can collaborate over a single source of product data, optimize it to meet every single third-party channel’s different uploading and formatting rules, and syndicate it to those channels with the push of a button.

Things never stay the same for long on the internet. Keep up with changing channels with our free guide to going omnichannel.

Download it today to access 15 pages full of insights into the consumer habits that are driving the demand for omnichannel retailers and brands, omnichannel best practices, and examples of other brands who have made the omnichannel leap and how you can, too.

How to Sell to Gen Z: Ultimate Digital Marketing Guide for Shopify

What Product Reviews Mean For Your Bottom Line on Amazon